The Islands of Tahiti enjoy a tropical climate; the maximum number of hours of sunshine is close to 3,000 per year in the Tuamotu Islands, one of the highest in the world! The temperature, which is relatively constant, is cooled by the trade winds of the Pacific that blow throughout the year. The average ambient temperature is 78°F/25°C, just as the waters of the lagoons. While further away from the equator, the archipelagos down south, (the Austral Islands and the Gambier Islands), enjoy cooler temperatures.

At the Polynesian latitudes, it is summer all year round! However, you can distinguish two main Tahitian weather “seasons,” dry and rainy. The first lasts from March to November and has temperatures of between 71°F and 80°F/21°C and 27°C; the second, from December to late February, is a little warmer (between 77°F and 95°F/25°C and 35°C ), but Tahiti weather is also subject to tropical showers, which are like hot showers which rarely last longer than 30 minutes.

The temperature may appear high, but the trade winds from the Pacific blow all the time and refresh the air of the islands beautifully.

Being much further from the Equator, the archipelagos furthest to the south, the Austral and Gambier Islands, have cooler temperatures than the Society and Marquesas Islands. As for the Tuamotu Islands, it enjoys the record-breaking sunshine, reaching nearly 3,000 hours of sun per year.

The vegetation in French Polynesia is particularly luxuriant during the rainy season, or season of plenty, between November and March. This is also the best time for those who love to sample new tastes as all the tropical fruit are ripe.

Click our link to Weather.com to check out current conditions and a forecast of Tahiti-Papeete. If you are interested in Bora Bora weather forecasts, visit here.

As you can see on the Tahiti and Bora Bora weather charts below, we are a Year-Round Sunny Destination!

The Islands of Tahiti  VS. The Hawaiian Islands 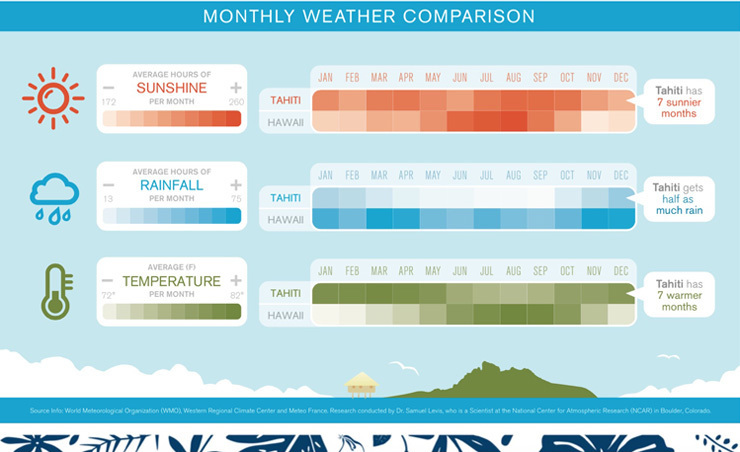